The voice from within and the Focolare Movement 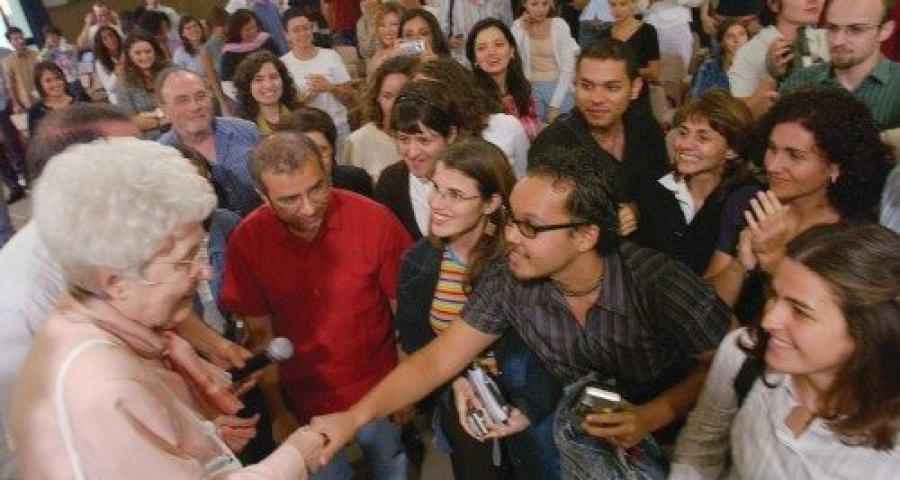 Chiara Lubich, as recalled by the economist who worked with her

Whenever we want to talk about a woman who has had a prophetic role in the Church, the paradigm of reference is here in the Bible. We often encounter women in the Bible when we are facing profound crises, in such circumstances where they offer different perspectives, in the same way as the prophets. There is, in fact, a particular closeness between prophecy and feminine talent. First, both are concrete, and activate processes; second, they do not occupy space, and speak with their words and bodies; third, they possess an invincible instinct; and forth, they always choose life, which they believe in, and celebrate it to the last breath. Chiara Lubich’s story is one of these women’s stories, because she brought a spring of living water to an Italian society that was torn at that time between fascism and world wars, and a church that was still anchored to an ecclesiology and theology of the old regime.

Chiara’s story is that of a woman, a laywoman, who followed an external voice that was also the most intimate and truest part of her. For a long time these two voices became the same voice, and Silvia Lubich (her secular name) and Chiara were the same person. Before 1943, these voices were distinct, and after 2004, in the last passages of her life, they became distinct again in her. This moment occurred when, under the shadow of a spiritual process in which her luminous life ended, some heard her say, “There is no more Chiara, there is only Silvia”. Every “charismatic”, every person who receives a charismatic gift for a spiritual foundation, lives in the continuous tension between a voice that is theirs and not theirs, words that are theirs and not theirs, a “name” that is theirs and not theirs - until the end. I knew Chiara personally and worked closely with her in the last ten years of her life, which were also the first ten years of my adult professional life as a teacher and economist. I saw her struggle to save the freedom of the first voice that had called her, to mark the difference between what she called the Ideal and the Focolare movement, to leave a generative gap between Law and Spirit, so that in that gap the spirit of the early days could continue to blow freely. Inevitably, her battle was only partially won, because these battles of the founders can never be won completely - every founder is a Jacob who, even if they come out victorious from the nocturnal and aquatic battle with the angel, they always bear the wound and continue to limp (Genesis 32). However, if the movement is still alive - and it is - and if, above all, our charism is still life-giving for young people and adults, this means that the angel’s wound was not fatal. Even with a limp, she and her movement have never stopped walking, experiencing the sequel so to speak. In the very last years of her life Chiara became more aware of the risk that the success of her movement might suffocate the purity and strength of the first voice that called her to Trent. This risk, which she perceived as both serious and impending, was perhaps the element that weighed most heavily on her that last night when she died 14 March 2008, at the age of 88.

Who was Chiara then?

Chiara was born in Trento, to a socialist father and a practicing Catholic mother. There, before and during the Second World War, she underwent formation in Catholic Action and in the Franciscan Third Order. Then, in 1943, she founded her Focolare Movement. In the early 1950s, she moved to Rome, then shortly afterwards to Rocca di Papa, where she continued to live and from where she led the focolarini, which in the meantime had literally spread throughout the world. The charism from which the whole movement around Chiara was generated is feminine, Marian charism, centered on evangelical unity and on that decisive moment in Christianity, which is Jesus’ cry of abandonment on the Cross. This last point, was so particularly dear to Clare it became the principal ideal of her life - “I have only one spouse on earth, Jesus forsaken”. In the summer of 1950, she led her movement to deal above all with spiritual pain, divisions and separations, to seek God where there is none. The social dimensions, particularly the political and economic ones, have always been of great importance. Therefore, it is not surprising, given the profound secularity of the movement, from which the Political Movement for Unity and the Economy of Communion (www.edc-online.org) were founded in the 1990s.

In the 20th century, Chiara was one of the Church’s most significant women. However, she was so in her own way. She was also a rebel in her own way, in a way that was so different and her own that it did not appear as such. For example, Clare and her movement - which in the early years was made up only of women, of girls - had always had a feminine and feminist trait, but Chiara’s “thirteenth-centuryness”, and therefore her radical catholicity, combined with her character that loved neither conflict nor controversy, produced a feminism sui generis. On the one hand, in fact, the focolarine, who were the type of woman who originated in the Movement, have always been characterised by a strong autonomy and independence from males, including priests. This autonomy -similar to and at times more accentuated than that of the female religious world-, was due also to Chiara’s undisputed leadership and ecclesiastical prestige (especially since the 1960s, with Paul VI’s pontificate). On the other hand, however, we find neither in Chiara’s writings nor in her actions any leading positions on the feminine question, and on the major burning issues of her time, for example, female priesthood, women and power in the Church, or family ethics. Clare and her movement have always expressed orthodox theses aligned with the official Magisterium of the Catholic Church. Thus, Clare’s genius was not expressed in proposing institutional innovations for women in the Church.

Where did it express itself then?

Certainly in mysticism. Chiara belonged to the great mystical tradition of modern Europe. Her experience should be read together with that of Claire of Assisi, whom she loved so much and from whom she took her name, passing through Teresa of Ávila, to arrive at more recent figures such as Edith Stein or Etty Illesum. She had an extraordinary gift of sensitivity for spirituality, a vocation that was both contemplative and active, a spirituality that she defined as “collective”, where Christianity showed itself and was experienced in community, reciprocity and communion. In the summer of 1949, in the Dolomites, she spent two months in a mystical experience (known as Paradiso ‘49), which decisively marked her life, the foundation and nature of her movement, and her spirituality.

Since she was a young girl, Clare felt a strong attraction to theology. Although she was not a theologian by trade nor had she undergone any specialised studies, she had a great theological intuition, which we could even go as far as to call a true theological genius. I worked with her for years in the Abbà School study centre and I could see how very impressive she was at her work in this respect. In particular, she excelled in penetrating the mystery of Christ’s passion and the Trinitarian vision of Christianity, in its cultural and existential implications.

In addition to an authentic genius for difficult and improbable dialogues with non-Christian churches and other religions, Chiara’s originality was also expressed on the level of thought and culture. In 1990, she felt an urgency to set up a study centre, and called upon the best theologians and scholars of her movement to join it, stating that a charism that does not become culture will not have a deep impact on the world and the Church. She had an immense esteem for culture and for men and women of thought - she had to give up university in 1939 because of the war, but this desire for culture never faded. From 1990 to 2004, for fifteen years Chiara spent every Saturday of the year, and a few weeks of her summer holidays, in founding and cultivating this body of thinkers from all disciplines, convinced that it was an essential step for the future maturation of her charism.

Finally, Clare’s prophecy was also expressed in the management of her movement. From the organisational point of view, what Chiara and her first companions - whom we should call disciples, to whom we should also add companions and disciples from 1950 - did was truly fantastic. Girls, not nuns, in a pre-conciliar church in Trentino that was all male, managed to give life to a movement that in a few years was found throughout the whole of Italy and then in the 1950s, on all continents. The method was that of Dante’s “mystical rose”, where each petal of the mother rose (Focolare of Trent) was detached and became a rose in turn with other petals, which were detached and so on. Each rose-petal had the same form and nature as the first rose. Therefore, the experience, spirituality and culture that had been experienced in Trento, went to live in Sicily, then in Brazil (thanks to Ginetta, one of her first companions), in Argentina (Lia), in the GDR (Natalia). These young women usually went alone, and despite remaining without physical contact with Italy for years, and with little contact by letter, they managed to replicate the exact same life they had experience in Trento. Chiara had extraordinary management qualities for this model that was neither hierarchical nor subsidiary, and perhaps best considered Trinitarian. An element of this success was Chiara’s talent for attracting many of the best young people of her time, who then became pillars and leaders of the movement.

Chiara did all this by using words above all - the words of the Gospel, her own words.

These words were impregnated with Christianity, and which enchanted, incited, and bound the whole life together. Lògos is the first enemy of tànatos . Like Sharazad, women ward off death, and thus prolong life, by giving us words and stories. Many women have done so, and do so. Chiara Lubich did it, and continues to do so.