The EoC Today: Challenges and Opportunities

By now, the Economy of Communion is nearing its twentieth anniversary. A “place of resistence”.

At the end of May, 2011, everyone in the EoC will meet again in Sao Paulo to rediscover the roots of this experience and outline new prospects. The EoC is alive and growing in today’s history, through the crises and the hopes of our time. Chiara Lubich’s proposal to begin businesses and industrial parks, and then (in May of 1989) to start a cultural movement that would give “scientific dignity” to the praxis of the businesses, did not fall into an empty abyss. It was embraced by thousands of people, mostly within the Focolare Movement but recently even outside of it. They are people and institutions who are trying to make that seed produce fruit.

At the same time, I believe that the entire EoC today is called to face a new step.

I was recently in Brazil and, together with some of the Brazilian protagonists of the project, we went back 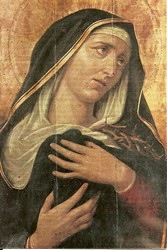 through some of the first moments of the project. It made me remember a not very well-known episode from those days, and this memory struck me in a particular way. Chiara, returning from that trip to Brazil, had noticed a detail in a painting of Mary Desolate which was in her office and which Igino Giordani had given her many years earlier. In that painting, Mary had a crown of thorns tightly pressed to her chest. For her, it was an immediate connection with the “crown of thorns of poverty” that she had seen in the favelas of Sao Paulo and which had been the inspiration of the newly born EoC.

The prospect that opened wide to the EoC was one of great scope: that of contributing to give life to a new economic-social order, to a new model of development, rethinking and connecting the two central realities of capitalism which are still opposites today: business (the motor of economic development) and poverty (of those who are excluded from that development).

An assessment of the EoC today should then refer more than anything and primarily to this dimension of the project: the relationship between businesses and the excluded.  Only then should there be further assessment on the cultural or theoretical impact that the EoC had or has in the Church, in society and in academia (obviously all important aspects), beyond its capacity to make entrepreneurs more ethical or generous.

From this perspective, we must admit that we´re still far from having fulfilled the vocation of the EoC. The success of such a project, in fact, is not measured on the number of the businesses that have become more ethical over these years and neither on the profits gathered and given (still too little). Neither is it measured by the development of the industrial parks. The EoC will be fully in line with its mission when it will become an economic and social model which is characterized by communion, and therefore, with a truly human face. To reach this goal, questioned everyday by our freedom and responsibility, there is need to know and want to face at least three demanding challenges.

First of all, as both praxis and as culture, the EoC needs to put itself always more in network with the other experiences of social and civil economy that, in their way, try to humanize economy. It is a challenge that Chiara foreshadowed in her lectio magistralis in 1999 on the occasion of her honorary degree from Sacred Heart Catholic University in Piacenza. In the ten years that have followed that degree, some steps have been taken, but there is need to do more and to do so on a larger national and international scale.

Secondly, poverty (which we prefer to call misery or exclusion, in way that is more appropriate and more in line with the Gospel) must be understood today in various ways. It can no longer be just the material poverty of the 1991 Brazilian favelas (although this dimension will always be central and important, as it is also often at the basis of other forms of poverty).

Exclusion, solitude, lack of meaning in life, of true values, of ability, of rights and freedoms, of relationships – always more, these are the typical twenty-first century forms of poverty which are accompanied by the traditional ones. In particular, starting from the charism of unity of which the EoC expresses, it is urgent today to love and care for these forms of need which arise from broken relationships, from famine of relational goods, from various forms of disunity (private, civil and political), and for which the charism of unity, through its vocation, has eyes capable of seeing in order to transform these wound into blessings.

Therefore, it is necessary to launch a new phase of creativity and innovation, where various enterpreneurs and actors of the EoC, current and future, feel the freedom and responsibility to look at the old and new forms of poverty to find new solutions, always remembering that the first way of fighting exclusion and indigence is the work of creating and offering.

Finally, it’s necessary to make a cultural and theoretical effort. Starting from the experience of these first years of the EoC and always in dialogue with many others, there is need to create a proposal of a new economic model that does not limit itself to the reflections on individual actions and on businesses. I’m convinced that economists, enterpreneurs and EoC workers have the potential to propose new models of development and institutional dynamics, which they offer as a contribution to that new economic order – environmentally, socially and spiritually sustainable, which so many are searching for today, and which is always more urgent to find.

If the EoC is capable of reading and facing these challenges with “charismatic” courage, the prophecy of Chiara will become salt for history, and will therefore be able to give its contribution to the well living of the women and men of today, within and outside of markets. It is not by chance that this year, besides the Brazil 2011 event, the worldwide EoC launched a “youth project”, which will have two significant international schools: the first in Latin American and the second in Africa, both in January of 2011.

In the culture of consumption, the EoC can and must be a “resistence place”, not made of islands but of oases of communion and gratuitousness, as the abbeys were during Medieval times. In fact, we can remember that Chiara intuited the reality that would later become the EoC (the “chimneys”) for the first time while contemplating a Benedictan abbey from high upon the Swiss hills. Hers was a message of communion and gratuitousness that has great value today as, in a world where money tends to become everything because one can buy (almost) everything with it, the EoC is a reminder that the greatest wealth is that which is given and shared. This goes for people and for nations.